This was not the ‘Call of Duty: Zombies’ movie that the trailers led me to believe it was.

A squad of American soldiers airdrop into a small village in France, with orders to take out a Nazi communication tower that will assist in the D-Day storming of the beach, only to find something much more horrific. The Nazi’s are doing some kind of human experimentation in a basement lab below the tower…

This sounds like a great set up for an Action/Horror. And they certainly get the action part of it right. The film kicks off with an explosive scene as we watch our little squadron jump out of a plane and attempt to avoid enemy, and friendly fire from all angles. It is truly is a miracle that anybody made it down alive, and the sequence captures this perfectly. Then for about the next hour we get a pretty decent war movie, as the Americans slink among the enemy ranks, eventually infiltrating the church that houses the communication tower, their mission annnnd a Nazi lab full of crazy experiment victims.

But this is my biggest problem with the film: it takes too damn long to get to the horror!

I’m all for getting to know our characters in a horror movie before things get real, (I really like these guys and the performances that bring them to life) but eventually I want all the build up to pay off. The further we get into the movie, the filmmakers drip feed some really horrific things. It has the makings of a really creepy film, but ends up being quite melodramatic, with a bond-villainesque finale.

I will say though that the zombie/creature/experiment (whatever you want to call them, they’re not quite zombies) effects are spot on. The stuff of nightmares, I only wish there was more of it! 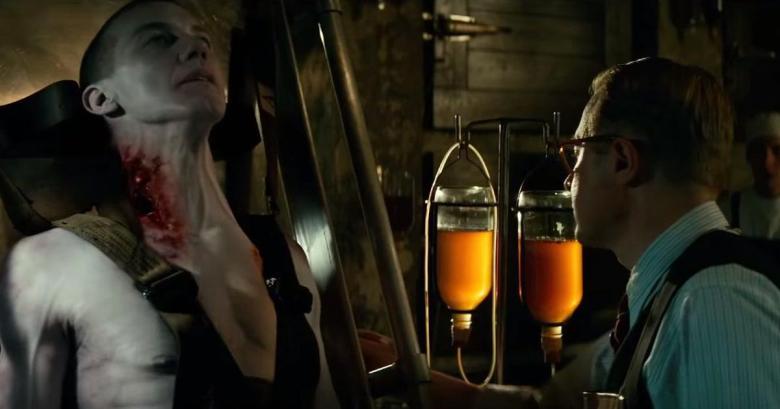 In the end I was disappointed by the lack of horror, but it’s a good watch none the less. Maybe don’t run out to see it in cinemas, more suited to a Netflix watch.