Vision is a trait that is sorely lacking in modern, AAA video-game development. For every God of War there’s an innumerable wave of by-the-book shooters and action RPGs that look pretty but fail to truly innovate. For that reason alone, the unique We Happy Few ranked among our ‘Must Play Games Before Xmas‘ list, but does this ambitious indie fall victim to its own hype?

Kick-started in 2015, We Happy Few has come leaps and bounds from the early-access title Compulsion Games released two years ago. Gone is the focus on procedurally generated survival in favour of a fully-fledged, narrative-driven campaign exploring one of the most interesting alternate realities ever envisioned: what if the Germans won World War II and every Briton was forced by the government to wear smiling masks and take happy pills to maintain the order of a failing state. 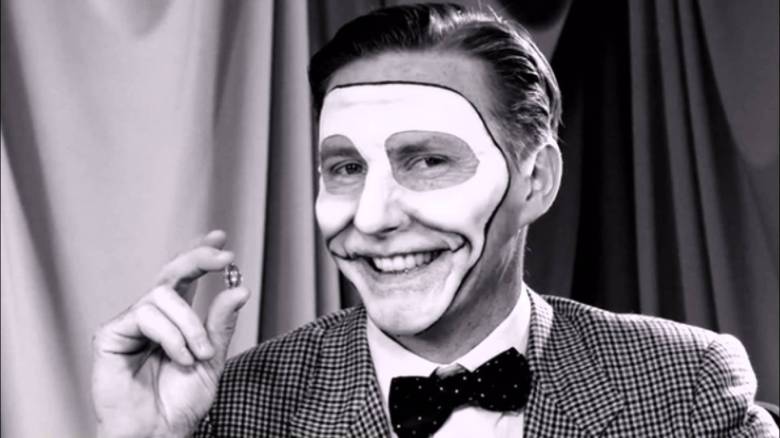 The premise is hard not to be intrigued by and carries one of the more thought-provoking narratives I’ve experienced in video game.

You begin the game as Arthur; a worker drone who refuses to take his ‘joy’ after coming across an old newspaper clipping that rejogs his memory of his brother, Percy who Arthur had all but forgotten since watching the Germans seize every child under the age of 13. Snapping out of your drug-induced euphoria you try to escape, are beaten up by the cops and banished to the equivalent of the Hunger Games’ District 12.

Determined to escape Wellington Wells and reunite with his brother, Arthurs sets off on what ultimately boils down to a series of fetch quests, collecting items and helping characters who in turn help you progress. It’s a perfectly sound gameplay loop, but it’s also where the cracks start to show in We Happy Few‘s illusion of choice. 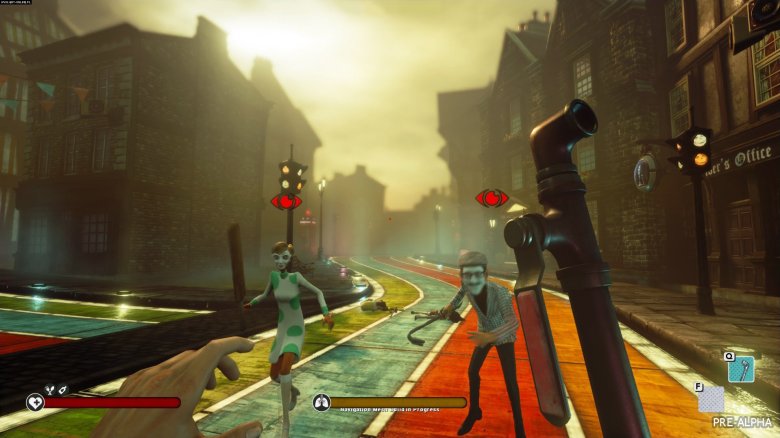 Combat or stealth is a decision gamers face in most modern action-adventure titles. Besting a powerful enemy on the back of good strategy is one of the most gratifying feelings a player can have, but it’s reliant on good control and more importantly, great AI. In these categories We Happy Few will leave few people happy.

Melee combat feels floaty no matter what weapon you brandish. Without a sense of weight, resistance and body-to-body hit-detection, I found my attacks were not only missing their mark but missing so badly that I’d end up on the other side of an enemy with my back to them. Hand-to-hand combat in any first-person game has never been a favourite of mine, so I’m happy to chalk that up as an eccentricity of the genre.

Shortcomings in the stealth department are harder to forgive. Crouching enters a stealth mode that allows the player to see enemy footsteps through walls. Unfortunately, the first-person perspective doesn’t lend itself to seeing said foot-prints very well, particularly when you’re squatting with your head two-feet off the ground and with your vision obscured by enemy resistant long grass. Playing on medium difficulty, it was hard to know what would trigger an opponent and what wouldn’t; a fact that’s made more frustrating when it takes several distractions to lure an enemy into a vulnerable spot only to be noticed during a ‘stealth’ takedown and swarmed by half-a-dozen well equipped officers. Once spotted, you can fight or run and hide in a bin (not kidding) or on a bench until the coast is clear, because nothing says stealth like holding a newspaper in front of your face in full-view of everyone.

In several sequences, it was easier to just sprint past every enemy to the goal than actually sneaking through!

Woven into the combat is a relatively basic skill tree, item management and crafting which can all be accessed in the game’s menus. If you’re an item hoarder, the amount of relatively pointless items you can find in random desks and lockers poses a major time-wasting problem. 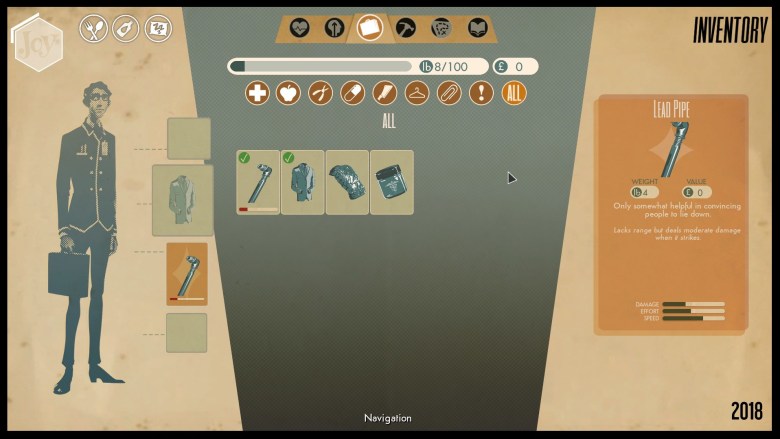 It’s unclear whether the ‘survival’ aspect of We Happy Few (which was a focus in early-access) were toned down to facilitate an emphasis on story, but if features are so light on impact that they’re borderline pointless, why leave them in at all? I’m all for realism, but the hunger, thirst and sleep metres in We Happy Few are an unnecessary annoyance.

Weighing up whether to take your ‘Joy’ at certain points in the game to placate NPCs on high alert is also relatively meaningless when you can avoid it all together, run and hide until the heat wears off.

Ultimately, all of these issues were born from Compulsion Games’ desire to please fans. The studio never set out to make a narrative driven game, they intended to create a procedurally generated rogue-like title that could be replayed over and over. Problem was, the setting was the most interesting part and the game’s backers demanded a traditional campaign be shoe-horned in.

The world between the locations of these major story beats is reportedly procedurally generated but I haven’t played the game through twice (and don’t intend to) to meticulously compare the differences.

It must also be mentioned that playing on Xbox One, this game’s loading screens are ridiculously long compared to what I’ve watched online of the PC version. Cut-scenes (including the opening) were noticeably choppy at points, but overall gameplay was smooth enough.

If you’re willing to put up with its gameplay shortfalls, We Happy Few provides a fascinating and provocative take on the price of happiness. It’s dystopian world is the true star of the show, well realised through the eyes of three protagonists who have each suffered differently under the oppressive reign of ‘Joy’. How many gamers are willing to pay retail-prices for a souped-up, but flawed indie remains to be seen, for what amounts to being a GOOD PLAY.